Cells are more or less rectangular in girdle view

(side view). Cells are usually elliptical in valve view

near their origins. Marine genus, also live in inland

waters of the United States. Centric diatom that

contains a frustrule or cell wall composed of silica

on ends of elevations (horns).Numerous

small chloroplasts. Cells can be solitary.

Distribution: Most abundant in north

some species capable of producing the neuron

toxin Domoic Acid (DA), which is responsible for

26 of which have been known to produce DA.

The genus Ceratium includes species of

freshwater and marine dinoflagellates. Most

species of Ceratium are unicellular organisms that

are characterized by their armored plates, two 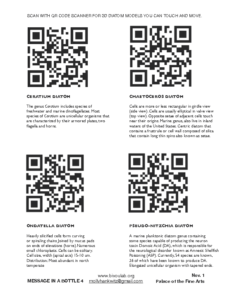