Selen Ozurk is a self-taught artist/poet, a translator, and a painter (see bio at end) who has been giving away her poetry in small booklet form to friends and strangers in and around the city. She does this when, she told me, she has made too many booklets to mail! Nine of her poems will be published in MONDAY a local, annual journal and she is completing English translations of both Arnaut Daniel  (See this for more on Arnaut Daniel) and Cavalcanti. (See here)

I read about Selen’s poetry on Facebook. She was giving away a last few (real paper) booklets and offering them to takers like myself, a lover of free publications & books. Since being introduced to her poetry through social media, and during this interview, Selen has created a third series, “15 Poems from Mendocino” which works together as fragments of a collection. They are provocative, almost haiku-like, searching works and I really loved them for this reason alone. 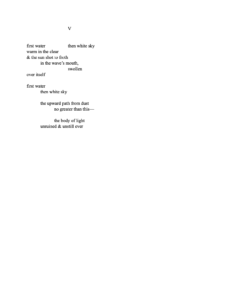 MH– About your poetry pamphlet, which I’m very happy to have, thank you…There is no author on the booklet?

SO – I am their author… while the choice to leave off the name was a deliberate one, no significant rationale behind it had occurred to me until I had already begun to give and sell the booklets and some who received them asked me if I wasn’t concerned that they would be stolen. My intention was to keep such a small project to an accordingly small and certainly more local scale than that it gained; any questions of claim seemed unfeasible enough when I was creating the work that I didn’t feel any need to assert it.

MH – This is the first poetry pamphlet that you have made. You mentioned “handing them out” or “they’re almost gone” – where do you distribute them?

SO – Yes! I completed this first project in late August, another in late September, a slightly heftier third the other day (in mid-October), and am now working on a fourth. I’m young  enough that I have been more concerned over these past two seasons about getting as much paper into the wastebasket as possible than I have been about getting the pamphlets into as many hands as possible. Thus, my intentional distribution was limited to virtual word-of-mouth, and my intentional ambition was that I send enough off –over and out of the country –that I print up ridiculous amounts and disseminate them in the flesh where I am now living and at least break even at that. 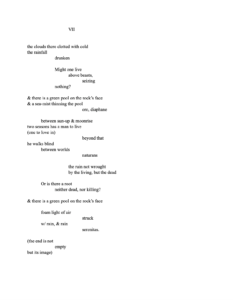 MH – Talk about the title, please. ‘Fragments’…of?
SO: In full— When I first began to write poems they were flowery & abstract; I knew that this was a crutch for the fact that I didn’t yet know what I wanted to say, let alone know how to convey it by my medium. I didn’t begin to grasp what I believe I am now grasping of how to write and (what is more important) how not to write poetry until I came across the work of Ezra Pound. I realized at once that the image was the way out of this mire, and just as well that it was useless to convey by a poem what image could better be conveyed by a painting. I wondered whether the key was not to convey a meaning by a syntax the coherence of which is possible only in poetry. In this my initial project I felt that, even aside from my inexperience, there was something endemic to what I meant such that I could only glean it in fragments. This effort was complicated by the fact that no-one composes a good poem with a meaning which is not somewhat discovered or developed in the very process of writing it. While I decidedly do not endorse the “first thought, best thought” M.O., there is always an irreducibly arbitrary element to this composition; one can have as many thoughts about something striking as there are hours in one’s life to form them, and one does not always know which had better be magnified, and which had better be left in the dark, in order that it strikes others just as clearly.
The fragmentary nature of my first project better enabled me to discriminate the thoughts which detracted the force of each piece from the thoughts which best informed its meaning. Thus, the pieces are consistently anchored in light (or lack thereof), which I felt to be the natural image before me which most closely transposed this discrimination, and much of their pathos was anchored in shoring up a little light, making an ever-upward creative center for oneself (or continuing in lack of one).
In short— They are fragments of what I mean to say.
MH – Where else is your poetry going or coming from?
SO – The idea is to produce enough good work that I may compile it in book-form, but this idea isn’t directing my writing…However, I am having nine early poems (i.e. the entirety of Fragments, save for one poem which I excised) published in an upcoming issue of MONDAY, a local, annual journal. I’ve sent out no work between that lone effort and the last half-month, which I’ve spent furiously slashing & sending a few batches of more recent work, and so I expect more headway on this front in early spring.
One should begin trying to write as well as the gods as early as possible, and I believe that one can’t begin that attempt so young, but in tandem with the attempt to explore one’s own ‘emotional spaces’; however, I’ve proceeded in systematic fear of the abstract & the confessional, which seem to me the most common pitfalls overcome by young poets in the process of honing their intention & technique, even if they may present confessional & abstract complexes in their more mature work. Robert Lowell & Anne Sexton exemplify well what I mean by the maturation of confessional poetry; Wallace Stevens & Paul Celan exemplify well what I mean by the maturation of abstract poetry.
I’ve been increasingly anxious to hone my technique toward the presenting itself, i.e. to instill a sense of the means by which I may present a complex of concrete images in a poem to stir the reader to a greater or lesser extent; a poem reads as lukewarm at best if it does not sustain a clarity of image & an intensity of emotion in its attempt to rouse.
MH – Ezra Pound has been an influence, how?

SO: Because of  that intention in his work toward the presenting itself, which I have just described, the cohering characteristic of my writing has bent—- particularly in the last twenty pieces I’ve written— toward:
(1) more concrete imagery, i.e. in presenting what I see, using objects from the natural (perceivable) world as non-metaphorically as possible; in presenting how and what I feel, using no abstraction in the poem that refers to nothing but itself (this has been the most difficult),
(2) leaner economy of language, i.e. using no word which does not contribute to the presentation of such an image,
(3) using no word, nor sequence nor break thereof, which does not contribute to a sense of rhythm which is naturally musical, i.e. which is not necessarily limited by any predetermined  poetic meter, but only by the maximum extent to which the words, when read, sing themselves. This is practically a cribbing of Pound’s early formulation of the principles of his technique. In other words, I owe to him my operative conviction that the sublimity of a poem is contingent upon the rhythmic condensation of a sustained emotional complex, & that the strength of this condensation is contingent upon the (almost always non-metaphorical) use of a concrete natural image, & the fitting of the words used to present it to their sound & cadence. 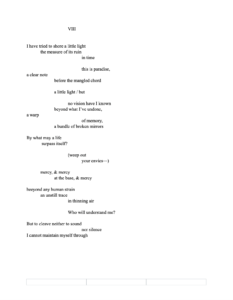 MH – Wonderful. What are your themes? Please describe.

SO: With considerable difficulty. To write at all is to hear oneself think more or less clearly, & in doing so to delineate that fragment of inchoate life driving the thought; in my experience, one senses a thought pre-linguistically, and formulates it cognitively, in near-retrospect. This process by which one finds & sustains the emotional sense in the course of this cognitive delineation & linguistic manipulation constitutes the predominating measure of success which I apply to writing in general, and to poetry above all. (Tangentially— I’m finishing a provisional translation of the complete works of Arnaut Daniel, master of the Provençal troubadours, & continually recall that the very word derives from the Provençal  ‘trobar’, meaning ‘to find’.) I write in recognition of this live experience, that is, that to think in syntactically meaningful English always comprises my formulating in English, after the fact, a thought which was more akin to a felt mode of being. In consequence, I’ve never written a poem or sentence with a communicable meaning that I didn’t more or less discover in the very process of writing it (and, always, in awareness of an irreducibly arbitrary element in this & all syntactical composition as such)…
All themes that I trace in my work are echoes of this consequence; the golden thread in all being the expression of certainty in uncertainty, a grounding firmly in the uprootedness that is the mode of self-conscious life as such, and an unimpeachable doubt as to whether any clarity to be found in this may extend at all beyond oneself & beyond one’s time. Bleak & empty the end-vision is certainly not, and its strength is in the contrary optimism, in the expression of the lifting force, the clear note in the mangled chord, the light-bruised bridge; however, one writes from a bleak & empty season, and one must write near to the heart; “in this is paradise enough.”

MH: “one must write near to the heart; ‘in this is paradise enough’. Thank you!

Selen Ozturk was born in Istanbul and raised in the Bay Area. She was educated in painting at the Rhode Island School of Design and in philosophy at the University of California, Berkeley. Alongside ongoing original work, her current projects include English translations of Arnaut Daniel and Cavalcanti from the Provençal and the Italian, respectively. She resides in North Beach, San Francisco.