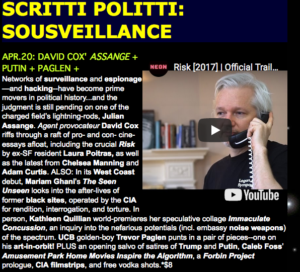 In 1989, known as ‘Mendax’, Assange and two friends formed a group called the ‘International Subversives’. Using early home computers and defining themselves as ‘white hat hackers’ – those who look but don’t steal – they broke into some of the world’s most powerful and secretive organisations. They were young, brilliant, and in the eyes of the US Government, a major threat to national security.

At the urging of the FBI, the Australian Federal Police set up a special taskforce to catch them. But at a time when most Australian police had never seen a computer, let alone used one, they had to figure out just where to begin.

Although Julian Assange has described the film as a “massive propaganda
attack”, he did discuss the film with Benedict Cumberbatch, with
Cumberbatch claiming that he’s “personally supportive” of the
organization.

Chomsky: Arrest of Assange Is “Scandalous” and Highlights Shocking
Extraterritorial Reach of U.S