An interview with Jeremy Hight by Molly Hankwitz 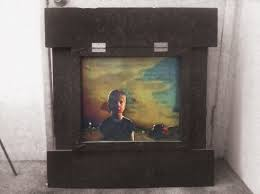 From Hight’s MFA thesis at Cal Arts (never again shown and later destroyed) An interactive work but made only of wood, cheap hinges, and a hidden motor.Text moved when the image was opened in the main gallery, but was impossible to fully read and when it was stopped the next person only saw what was left after the first viewing.

Jeremy Hight is a friend, a writer and a theorist, best recognized, perhaps, for having written the essay, “Narrative Archeologies”, credited as one of four primary texts on locative media. Since that essay, Hight has been tirelessly working with new media in a literary and theoretical  way, writing for numerous journals and publications, and concerning himself with how narrative structures work within technologies and memory as a novelist.

In this long-awaited interview, I asked him about the locative work as an inspiration or catalyst for the recent novels:

That first (or one of the first) locative narrative works was made mostly because the technology could let places and history speak in a sense and potentially skin the world with stories, things not possible on paper. I literally almost got hit by a car when it hit me while crossing the street. The theory feeds the writing and vice versa for me and theory can be so beautiful in ideas and in exploration in the way of narratology and poetics. Also my mind processes in pictures and leaps, some lean toward theory and others to a story or sometimes both.

And about starting out writing novels and pursuing writing…?

I wrote and completed three novels years ago but felt each had huge flaws. I did a wild cleanse and tossed them out (3 hefty bags of paper). I knew I must always keep learning, pushing, working toward new aspects of voice and craft and the cleanse ended up really helping this process. Soon after I had an epiphany while heading to work on a summer morning as the sun was just breaching the horizon. My wife, also an amazing writer), put on Chopin instead of our usual oldies or a podcast and all became light and form, shades of color, a quiet loudness of lines and gradations. It was stunning. I sensed then something elemental and profound in paring things down, implying metaphor, seeing subtle repetitions…

As an odd, young boy I was in love with science, history, writing and word origins (etymology) equally. I sensed that they also all cross-pollinated each other and at times that borders of naming of forms and fields were problematic, limiting and even absurd. As a pimply teen I did things I just told no one about as I was too scared to seem weird. I wrote a unified field theory at 14 that was not terrible, I developed an immersive interactive intuitive weather data analysis tool that narrativized data sites “live” as a simulation at 12; obsessively studied game theory, chaos theory and quantum mechanics in high school. I also began to struggle with math in its mid-ground innards. The steps were hard for me (I see now I have dysfraxia and numbers move around ). The dream of a Phd in meteorology was fading fast. I still loved language, though, and the concepts and beauty of weather and data and I began falling in love with conceptual art. 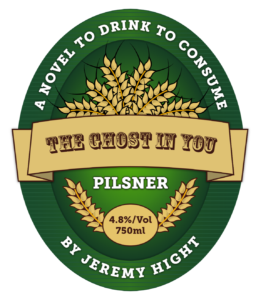 You’ve written this book “The Ghost in You”. Tell me about how the publication came about…

The publisher runs a radio show and has interviewed me before about my more conceptual and new media work as well as short stories. He is a conceptual artist himself and sound artist.  Life is funny. I was shopping for publishers for my novel and he said, ‘Hey, what if we make it a conceptual work together?”The book is printed as a zine format intentionally, but with double cover and he selected symbolic images and new line breaks before typesetting so it is the death of the author and a work of text and image and a larger concept.  The run is only a hundred in print and each is hand numbered like prints of a painting would be. After we sell out (soon)  it will only be available as a digital download and the “book” as object will be a ghost.  I will be making it over as dada-esque objects for sale, too, goofy votive candles, jellies to spread on toast (or not), and a beer brewed based on the balance of elements in the prose (an idea I first had years ago… relating a digital image or text as a balance of “flavors” in something tangible like a soda.

My other book available on Amazon is called “What Remains” and it was published by a semiotician and digital artist named Talan Memmott. It was a conceptual work that took sci fi films like Jurassic Park and took out all sci fi and text and I wrote new classic literary prose from the skeletal prose and narrative that was to remain.  Jurassic Park with no computers or park is a bare-bones tale of faith and mortality. It worked surprisingly well.  My first published book was called “I Am the Ghost Here”  and was a short story collection that crashed Hitchcock-like suspense with elements pulled only from the dynamics of social media. The ghost is/was  both me as author (Roland Barthes again with death of the author)  and of self into flesh space and digital space.

Tell me about the ghosts…

The place we live in now has a gentle hungry ghost…Female….I wish I could help her. I really do. But, she exists in a liminal space; perhaps in a house long gone as did the ghosts in my parents’ house growing up (a man always politely floating around looking for his wife and her falling and making a splash for twenty years among other things). Time is not linear and these spirits are self-aware. The man would actually apologize when seen and she has said she is hungry and cold. We both have heard it. In the novel I felt the need to explore narrative as a sort of moebius strip, two characters and stories that overlaid, but never literally crossed. She senses him as a moving of air as he is a spirit while he flies/drifts to help her. At times he can see things mortals simply cannot. There also are subtle similarities between the two. She longs to actually touch objects for a tactile kind of memory trigger; to feel the past and loss while he is tired of absolute freedom and misses the aches and itches of a body and things like job interviews, a shoe untied, the obtuse mundane bondage of existence. William Blake blew me away as a teen because he examined huge dichotomies not in ethics and nature but in poetics and within seemingly something else added. Martin Amis in Time’s Arrow  showed by time moving backwards how horrific moments in history can be in their inhumanity and cruelty as almost to do harm to time and space itself. Toni Morrison showed me how so much internal pain could be expressed so powerfully by both metaphors and descriptions; that deeper inference. Such amazing work.

Ghosts come with a litany of clichés. How did you approach this?

I wanted to avoid the minefield of ghost clichés some of which are:  how they move, are disconnected, can lead to cheesy messages and even bad love stories so often. The ghosts in some Japanese stories, however, are echoes from the past and can even be moral compasses in the present for those who have strayed from what is moral and kind. Other ghost clichés I worked to avoid included the ideas of the evil ghost, the benevolent ghost, the one dimensional spirit that is a cartoon, the redemptive moral allegory of the ghost having to find their divine purpose and of the ghost being some symbol of modern society. These were on my mind while writing the entire book as pitfalls into which the writing could fall. The ghost in the book is morally ambiguous, thus, at times wishing to be parasitic in a human to “live again” and taste the little things we hate like failures and limitations, the mundanely moral. At other times he is caring , melancholy, and longing for some greater meaning to grasp.

Talk a bit about what drives your creative process or gives it meaning…?

I wrote the book using music as a kind of internal spatial joystick for him (the ghost). Ambient-like Eno when he was to drift across the skies, Chopin and other classical when he needed to move more specifically on the ground and with others alive or also in a liminal space. I tried to keep that first morning I mentioned above close as well, with the sun rising and light and shadow along the forms of nature and city; that deep tide under things simply as they are. Something I see in both main characters and their lives and events they exist in is a kind of combination of solidity and fluidity, sort of like the butter melting on the persistent pancake metaphor.

Memory, it has been argued, is the main body of a life lived and how one sees oneself and their place in this world. The present is but a hectic or dull sliver that only feeds, continually, the past. It is what remains, decays, distorts or is forgotten. Neurological science has found that we must forget or little details will sink cognition into a morass of minutia and detail. There is something so moving in the need to forget and to remember deeply, but incompletely. A beloved book if remembered whole and complete would cool down (like that pancake stack in the opening scene)  into something not to return to, into words as driving directions, not poetics and resonance, so we forget parts and remember others and return again as a different person to read the work as our life experience. Current world and tastes and desires have changed as they always do, yet a spark forms once again, and a conduit and circuit flows once again.

What are you working on now?

My theory has come to show itself in new media art, electronic literature, glitch art, sound art, theory texts and concepts within stories and what a book can be. Now I am researching artificial intelligence and have developed methodologies to pull new chapters from old novels by extending algorithms and the unfinished equations within a narrative of interactions of variables and self-aware prose that changes with each reader and “reads”  by parsing text from the internet. The funny thing about academic writing is I have published mostly book chapters (semiotics, art theory, aesthetics, art history, pedagogy, semantics, poetics and digital art methodologies) but outside of classrooms I wonder who reads them at all. They perhaps are the true ghosts.

I’d like to read your pedagogy. We need strong ideas in pedagogy today for the kinds of students we have and to decolonize academia – with the #BIPOC, #LGBTQ movements, women’s movement.

Thank you for taking time to give us your provocative insights about the work. 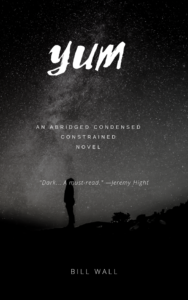 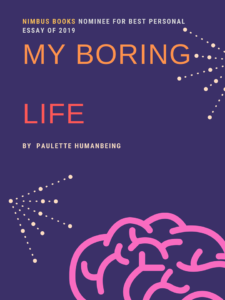 A few paragraphs by conceptual artist published as a digital book

These fake book covers are from “Nimbus”, an absurd publishing house

within an imagined, smelly room behind the timeline on Facebook.

It is a conceptual folly. Designed by Jeremy Hight and shown in galleries and online exhibitions. 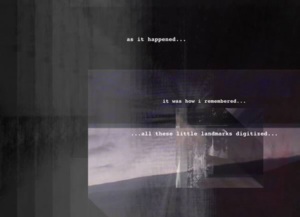 Still from the collaborative work “Carrizo Parkfield Diaries” now in the permanent digital collection of the Whitney Museum of American Art.

Hight’s prose poems of ‘memory’ and ‘trauma’ were correlated to data from earthquake sensors in the San Andreas fault.

‘The work was me beginning to look at the notions of text and image and form and ephemerality be it in digital art or other forms.’ – Jeremy Hight.

The Ghost in You